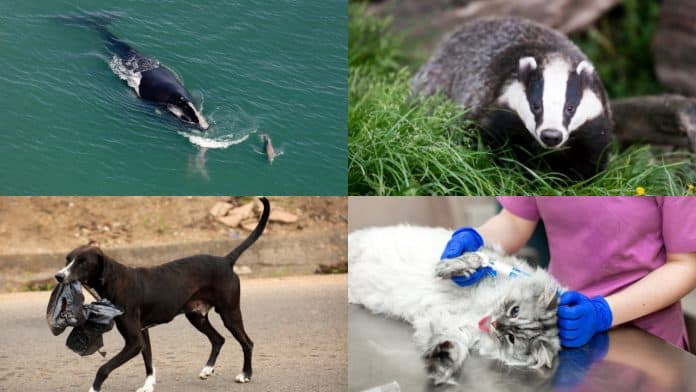 California is the first state in the United States to ban toxicity tests on dogs and cats for pesticides and food additives. These painful tests involve exposing animals to toxic ingredients and chemicals to determine whether they are harmful to humans.

“For many families, including my own, pets are beloved companions that enrich our lives every day,” said Governor Newsom. “I’m proud to sign this legislation to advance our state’s leadership on animal welfare by ending cruel and unnecessary testing on dogs and cats, among other measures to protect the health and safety of pets in California.”

California is taking nation-leading measures to protect our pets. 🐶🐱🐾

— Office of the Governor of California (@CAgovernor) September 26, 2022

“Eighteen months ago, there was hope that disentanglement efforts could remove enough of the gear and that would allow her to survive,” Sharon Hsu, a research assistant at the Anderson Cabot Center for Ocean Life, said.

“Now, she’s covered in orange cyamids [whale lice]. She was moving so slowly, she couldn’t dive, she just sunk. She’s suffering. There is no longer hope for her survival,” Hsu added.

Scientists said this was the whale’s fifth time being entangled in fishing gear. She even gave birth to a calf while entangled at the end of 2021. A boat killed her first calf; the second one hasn’t been seen since April.

We are witnessing one of the few remaining reproductive right whale females slowly dying in agony because of the commercial fishing industry. Snow Cone is emaciated and covered in lice, and her calf hasn't been seen in months. pic.twitter.com/8iQuYMGljQ

World Rabies Day
On World Rabies Day, 28th of September, animal welfare organization Network for Animals is calling for donations to help vaccinate dogs in Tanzania. Rabies is easily prevented by vaccination, but non-vaccinated dogs are dying from this disease daily in the country.

“Dogs who get rabies die incredibly, painful and undignified deaths, but it’s so easy to prevent it,” Network for Animals said, adding that “it costs just $6 (£5,60) to vaccinate ten dogs against rabies.”

Today is #WorldRabiesDay. Just $6 (£5,60) vaccinates 10 dogs against rabies & prevents them from dying excruciating deaths. We’re vaccinating in #Tanzania right now. How many dogs will you help us vaccinate today? Click here to donate & get them protected! https://t.co/GLyzUFaMtK pic.twitter.com/FDxV55kVyu

The World Health Organization (WHO) said that rabies is a 100% vaccine-preventable disease and reminded people of the importance of caring for the health of animals, people and the environment.

This year, #WorldRabiesDay, let us bring together people, animals, and the environment under the banner of one health.

We can work together to eliminate #rabies.

Rabies is a 100% vaccine-preventable disease.
🎯Vaccinate and save lives. pic.twitter.com/i9G6a1DvVK

Badger Horace
After being hit by a car, Horace the badger is slowly recovering from his injuries. The elderly badger is currently spending his time recovering with corticosteroids and painkillers, veterinarian Iain McGill said.

Horace update: his wounds have healed and he's eating well. He had to be moved to a bigger enclosure as he tried to break out of this one in the night. He'll have lots of places to hide, and lots of earth to dig into, in his new home pic.twitter.com/3zGv4nCaNg

Thousands of Caspian seals wash up dead in Russia