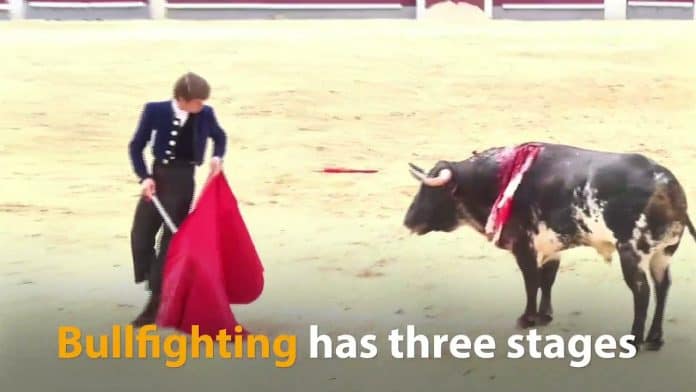 Bullfighting has three stages: first, the bull is provoked with large colorful capes, then picadors (men on horseback) pierce the bull’s neck with a lance.

The matador (bullfighter) then stabs the bull with banderilleros (wooden sticks with sharp ends). He has to place four banderilleros in the bull before giving the final blow and killing him.

Almost all of Spain’s bullrings, have remained closed for the last year due to lockdown restrictions. “It has been good news, one of the few good news brought by this pandemic,” Aida Gascon of animal welfare organization AnimaNaturalis said earlier.

“Although we know they are going to die anyway as they will be sent to the slaughterhouse. But at least those animals are not going to be tortured and nobody is going to benefit from that torture show,” Gascon said.

In recent years, bullfighting’s popularity has declined as Spaniards are more and more divided over the bloody spectacle; some considering it an art form and tradition, while others think it is cruel.

Croatia arrests German tourist for killing his dog with hammer