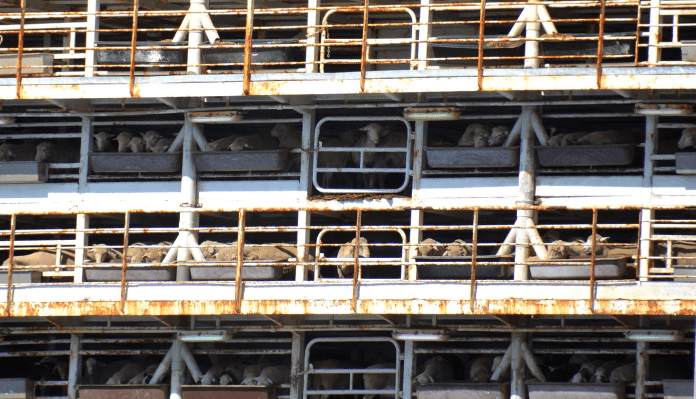 Lack of ventilation, high temperatures, intense humidity, high levels of ammonia, wet bedding, animal injury and death by suffocation from overcrowding are common problems that vets witness when they inspect the livestock ships that arrive in Israel.

This was presented at a Technical Assistance and Information Exchange instrument of the European Commission (TAIEX) multi-country workshop on animal welfare during sea transport. Different countries, like Israel, Ireland, France and Romania share their experiences with sea transport of animals.

The presentation by Lauren Stein, a government veterinary officer from the Israeli Ministry of Agriculture, was basically a horror story for animals. We know this already from videos made by animal welfare organizations but this time the Israeli government itself is admitting that it’s just horrible.

Vets concluded that the ships are dirty, old and not well kept. They arrive in bad conditions with leaks, rubbish and rust. Veterinary officer Stein wonders how these ships are even authorized to carry cows and sheep. Fans are frequently insufficient or do not work at all and automatic water dispensers blocked with so much dirt that they stop functioning. So animals are left with no water.

The pens are very crowded. Sheep have no space to move or even lie down. They’re stuck against the walls of the pen. Sometimes they come from Australia which means they’re cramped for three weeks.

No food
Stein also mentioned that often if the ship arrives at feeding time, the animals go unfed until they arrive at the quarantine station. Even if unloading will take some time, they don’t get fed.

Background
Cows and sheep are imported only by sea to Israel. The animals mainly come from Europe and Australia. Most of the animals are used for fattening and are then slaughtered. The animals that arrive in Israel are intended for both the Israeli and Palestinian markets.

The number of animals imported yearly is rising, despite public concern regarding the animals welfare. In 2018 almost 686.000 animals arrived at Israeli ports.

According to animal welfare organization Animals Now many people in Israel don’t know that their meat comes from animals that have been on a hell journey only, if they survive, to be fattened and killed.

The following pictures are made by Israel Animal Save on the ships, the quarantine area and feeding lots.

Coming soon to a 3D printer near you: Plant-based steaks

The Animal Reader is an animal news organization. We're always looking for journalists to cover stories in their country.
Contact us: [email protected]
© 2020 The Animal Reader