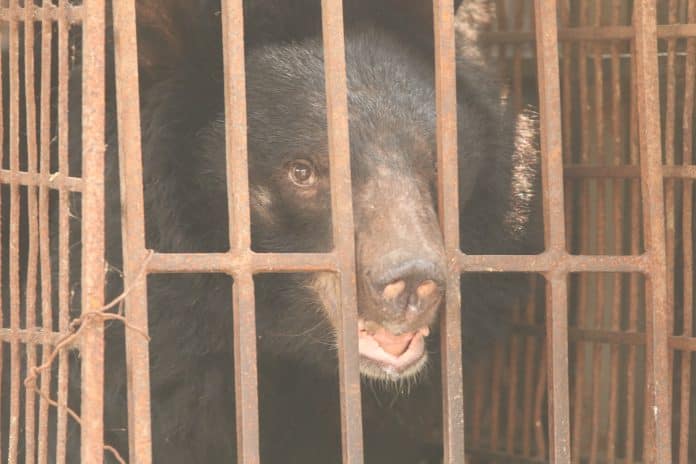 Amy was saved by the animal welfare organization Animals Asia a week ago from a farm in Phung Thuong in Vietnam. She’s very ill and needs a lot of care. The small village is a notorious bear bile farming spot.

According to Animals Asia there are still 164 bile bears in the village, cramped in small cages, used as things to only extract bile from. The organization thinks there are in total around 800 bears living in these horrible circumstances in Vietnam.

Amy is a female Asian black bear also known as moon bear. Her recovery will be long because she is so ill. Her medical examination showed that she has suffered terrible neglect which has left her starved, traumatized and in terrible pain.

“She weighs half of what she’s supposed to. All four of her canine teeth are broken and infected. Because she’s so unwell, we can’t do dental surgery”, says bear and vet team director Heidi Quine. “She has an enlarged gallbladder and is missing half of her tongue and right forearm.”

Bear bile farming
Bile or gall is a fluid produced by the liver and stored in the gallbladder. In some Asian countries, it’s believed that the bile of a bear can be used as a medicine for liver diseases. Even though there are effective herbal and synthetic alternatives which makes cruelty to bears unnecessary, bile farming continues.

To get the bile from a bear surgery has to be done to insert a tube in the gallbladder. The bear can then be ‘milked’ for its bile. It leaves the bear scarred and in terrible pain. At these farms, bears stay in small steel cages where they can’t sit up straight or turn around.

Some bears are caught as cubs and kept in these conditions for up to 30 years. They get little food or water and are taken care of very badly. Organizations that rescue them always see starved and dehydrated bears with deformed or missing parts of their body.

Animals Asia has even seen old or very sick bears, that can’t produce bile anymore, left to starve to death in their cages.

Vietnam
The good thing about Vietnam is that using bears for bile farming has been illegal since 2005. For example, in China it’s still legal and there are over 10.000 bile bears there. The sad thing about Vietnam is that when it became illegal, farmers were still allowed to keep their bears in the same horrible conditions. Farmers had to promise not to use them for bile, but there’s no one really checking so farmers continue these painful practices.

Another sad side to this story is that a study led by the Australian animal welfare group Free The Bears found that bear bile farms across Vietnam are starving and killing their bears because keeping them alive has become too costly. So farmers either continue using them for bile or just leave them to die.

What will happen after Amy
The rescue of Amy was extra special because it was the first bear given up voluntary by a farmer in the village. Animals Asia Vietnam Director Tuan Bendixsen said: “Phung Thuong is a small community with a huge bear bile farming problem. Everyone knows each other here and nobody wanted to be the first to break ranks and give their bears up for rescue. To reduce the pressure on the local community, we agreed to rescue Amy secretly as this will provide the greatest chance of allowing other farmers to follow suit and give up their bears.”

What can you do
In 2017 Animals Asia had signed a legal binding agreement with the Vietnam government to completely end bear bile farming and send every bear to a sanctuary by 2022. But all these bears need a place to stay. In the existing bear sanctuaries of Animals Asia and other organizations is not enough space. So there’s a need for more bear sanctuaries. On there website they give many ways on how you can get involved.

Free the Bears and FOUR PAWS are also very active in ending this extreme suffering. Visit the websites and see what you can do. These organizations are also work in China where bear bile farming is still legal. It needs to become illegal and those bears have to be rescued.

The Animal Reader is an animal news organization. We need your support to create news stories where animals are the focus. Big or small, it would mean a lot if you could sponsor us.

Hundreds of animals left to die in Bangladesh pet shops