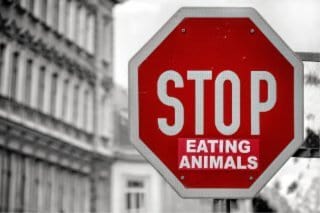 The reason I went vegan is because I find it sad that animals have to suffer for my taste buds. I was a big meat lover but after seeing videos of how animals were being treated, it made less and less sense to still eat meat. So 10 years ago I became vegetarian. And since a few months vegan. Animals were the biggest reason for me to go vegan, but I also believe it has benefitted my health. If you want to go vegan, but are still doubting, here are the three biggest reasons people go vegan.

Health
Many doctors acknowledge the benefits of a plant-based diet. Cutting animal products from your diet benefits your health and can make a major difference when it comes to heart diseases and type 2 diabetes. I do have to say that you’ll notice the benefits when you become a healthy vegan. I will write a post on this later, but when I first turned vegan I didn’t really know what to eat so I had a lot of fries. Not really recommendable for health 🙂 But I got a good vegan cookbook and online you find a lot of healthy and delicious plant-based recipes.

Animal suffering
This is why I turned vegan. It’s just not fair for me to decide a living being has to die so I can eat it. There are so many undercover videos out there of torture and abuse of animals. It’s sickening. It’s not up to us to decide which living being gets eaten and which not. What was the turning point for me was watching all those undercover videos and after seeing them, I could basically not unsee them. The whole meat and dairy industry is just cruel and not necessary.

Saving the planet
I hear more and more people eating less meat for this reason. Basically, showering shorter to save water or flushing less doesn’t do as much as how much water you can save by going vegan. It takes a lot of water to take care of all the animals in the meat industry. You use up to a 100 to 200 times more to raise a pound (!) of beef than to raise a pound of vegetables and fruits. And there are a lot of chemical and harmful gasses like methane and ammonia when animals’s shit. If we start creating vegetable and fruit farms instead of meat, we’d be creating healthier air and waste so much less water.

The sad plight of rabbits

Commercial fishing is an abomination and it’s killing the planet